You are here: Home / News / Monastery and territory: spiritual and spatial peripheries 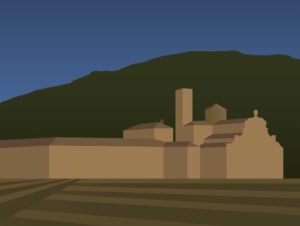 Armonie composte
Cycle of seminars about the monastic landscape

Responding also to the stimulating questions raised by the first seminar in the Armonie composte cycle, entitled Constructed landscapes, landscapes in art, this second meeting will explore the theme of “periphery” in the sense of the outer edge of urban settlements.

Throughout their history, monasteries have chosen to establish themselves away from town and city centres in places that combine seclusion with sufficient proximity to allow them to maintain a dialectic relationship with urban realities and with the world. As in the past, a common factor in these landscapes is the priority they give to constructing “community” spaces, designed to enrich the lives of the people who inhabit them and to lend themselves gradually to being absorbed into the urban landscape. Today, monasteries embody a borderline territory encompassing both the spiritual dimension and a concrete commitment to constructing the human environment, and as such can themselves be understood as “periphery”.

Can history or the present day provide models and experiences of periphery construction, like the example of the monasteries, that can guide contemporary endeavours to reclaim urban landscape development from the figures Andrea Zanzotto defined as “heartless planners”? Is it possible to discern elements of community values and aspiration to centrality in peripheral landscapes? The seminar will set out, therefore, not only to identify a concrete relationship between monasteries and peripheries in history as in contemporary life, but also to reflect on the nature of the monastic system and on how it can work as a model for human peripheries. In other words, the aim is to reflect on the monastery as a small-scale laboratory of humanistic thought and practice Praglia Abbey and Padua University have joined together to enhance knowledge of monastic landscapes, and in particular of the Benedictine system of land planning and management based on the distinctive approach to community life set out in the Rule of Saint Benedict and in general in the whole range of monastic thought that it inspired.

Organised with the support of UNISCAPE