You are here: Home / News / Outcomes of the First Meeting of the Rectors | UNISCAPE Extraordinary General Assembly 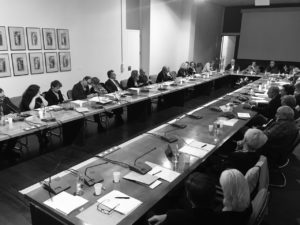 The Rectors and delegates of almost 30 Universities members of UNISCAPE participated in the Extraordinary General Assembly and First Meeting of the Rectors of the Network on 23 November 2018, hosted at the University of Las Palmas de Gran Canaria.

After 10 years since the beginning of the activities of the UNISCAPE Network in support of the principles of the European landscape Convention, the academic institutions at the higher level engaged themselves to start a process leading to the presentation of a common declaration, with the aim to encourage greater attention to the societal importance of Landscape in Higher Education in Europe and to emphasize their firm commitment to a coordinated trans-disciplinary approach to Landscape research and education, to be endorsed by the National Ministries of Higher Education, the Commissioner of Education of the European Commission and the relevant European University Networks.

In recent years, local and regional authorities and civil society have been increasingly demanding that landscape – i.e. landscape as perceived by people, whose character is the result of the action and interaction of natural and/or human factors (European Landscape Convention) – which is continuously changing as a result of a large range of driving factors, should receive more attention from policy makers, which requires a greater involvement of qualified professionals for the sake of a more balanced future of the European landscape.

The meeting, chaired by The Rector of the ULPGC Prof. Rafael Robaina Romero, resulted in a Statement of Intent unanimously agreed, in which it is defined the process to be shared within the Network, in order to draft and sign the final document to be called the “Las Palmas Declaration”.